OK, this is kinda a 2 parter, why? well because under normal conditions this would be a rather easy install, but, do my Voodoo Canzo's unusually wide rocker arm setup and rather small mounting screw, there was a bit of customizing needed to install it properly.
Real World Cycling has a pretty extensive list of frames that they have direct fits for, and Chris is really helpful with fittings to unlisted frames so if you're bike isn't there, just e-mail him and ask.. he'll help you get it set up.!
(link to list of frames and kits needed.. http://www.enduroforkseals.com/id276.html)

1st off I was going to do both upper and lower bearings but actually after a quick chat with Chris it was determined that the lower joint moved so little during the suspensions arch that it really wouldn't add that much improvement.  Being that it's not a standard listed frame I measured the spacing of the shock mount and ordered the bearing and tools needed to remove the old bushing and install the shock bearing kit. 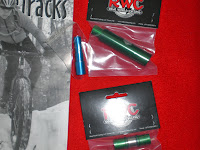 I didn't take a picture but the kit includes a roller bearing, the bearing race tube and 2 end caps with dust seals, basically everything to replace the mounting hardware and bushing of a standard setup. 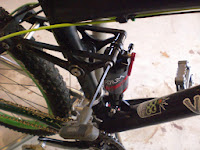 In normal cases you just remove your shock from the frame and taking the tools (ordered separately) you push the old bushing out and press the new bearing in. Along with the specialty tools you'll need a 5/16" (or metric equivalent)  bolt around 5 inches long with a few washers and a nut (cost was under 3 bucks at local hardware store)
You take the tools and put the push tool on one side and the receiver tool on the other, slip the bolt thru with the washers and a nut and give it a twist with a couple of wrenches. The Blue tool is made for just removing (and installing if you ever want to do that again) the bushing where the green one is for both the bushing and bearing removal and/or installation. The green tool has marking on it to tell you which end to put against the shock for install or removal, it's good to pay attention to those as you'll just squeeze things and nothing will happen if you set it wrong. 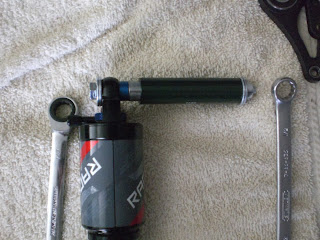 I was rather surprised at how easy the old bushing was to press out with the tools and after the initial umph needed to break it free it slid out with little effort on the wrenches. The bushing actually slides inside the receiver end so you can't see it when it's done,  but it's very obvious when it's full out of the shock.

I took the shock and a bit of rubbing alcohol and wiped out the eyelet, then setup the tools for pressing in the bearing. there is a 2nd piece to the green tool and you use it instead of the blue one for pressing the bearing is and keeping it centered and straight. Make sure you flip the larger green tool as it stops the bearing from going to far beyond the center of the eyelet. 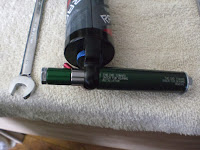 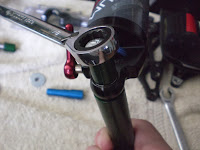 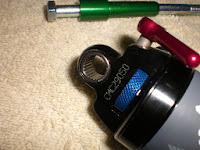 Now you just take the supplied bearing race and end caps and making sure the dust seals are against the shock covering the bearing, and bolt onto you bike... 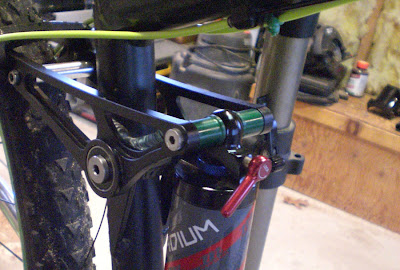 Just a short video of the action, I wish I had taken one of the shock before I installed this, I would say it would have been a lot more "jerky" as it's now a much smoother action for sure.
(PS yes the shock is a tad low on air at the time of this recording)

1st Impressions, well, Even from just a quick trip down my little trail in the yard I would have to say there is a noticeable improvement  in smoothness and small bump action. I Actually added about 5 lbs more air than I used to and it's still WAY smoother than it was on the small pot holes and branches and such that are normally kinda jarring.

here's just a goofy video I did with some of these photos and the cam shot of the first ride down my mailbox trail...