OK, Been busy, kinda forgot about this place. But I'm back, sorta. 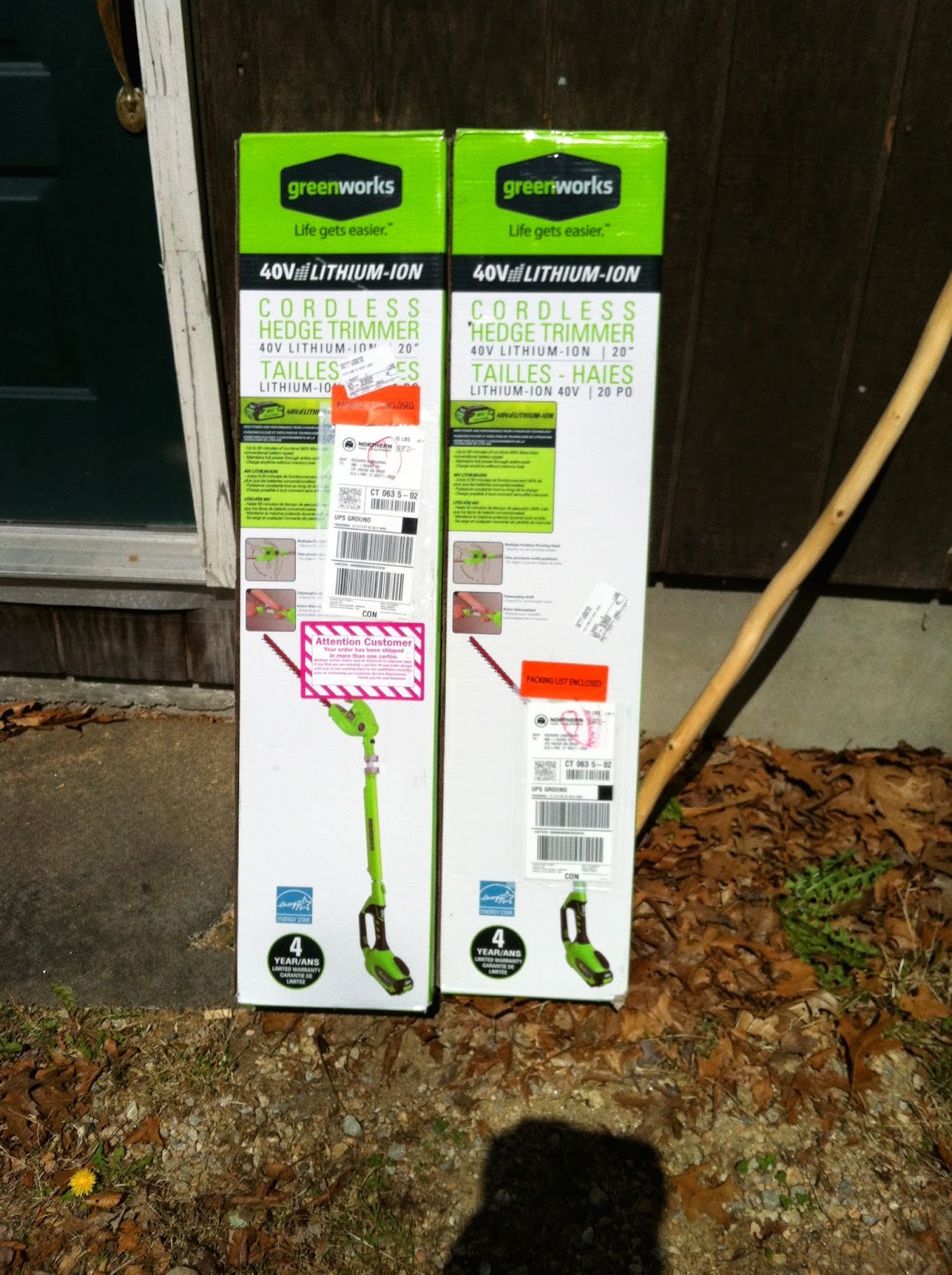 Southeastern Connecticut's Chapter of New England Mt Biking Assoc. started up in February and we quickly applied and received a grant to purchase 2, 40 volt, 4ah battery powered, extended reach hedge trimmers to be use for trail cleaning and brush/briar control on the trails in the area. These are the Greenworks brand and the largest battery they can come with. (I don't think anyone else makes an extended reach hedge trimmer?) We received a regular gas powered one from the Town of Lyme a couple years back and it worked well, but bending over to get the close to the ground stuff was kinda a pain in the back. The extended reach and the pivoting heads of the battery powered units seemed like a great idea. And, I have to say, they are! 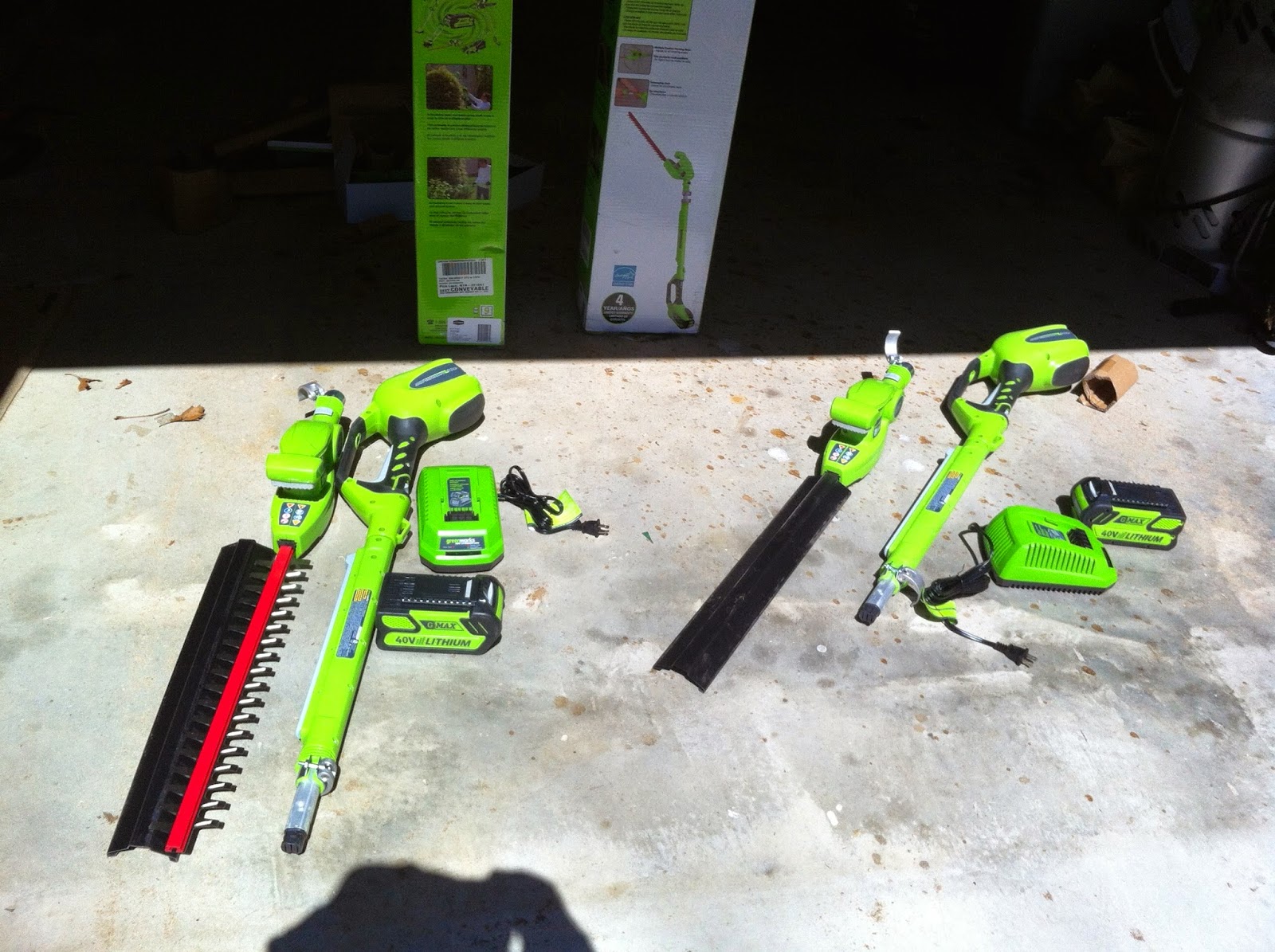 I've used them a good amount now and have to say they are better than I even expected.  We used one at the "Trails Day" with the CFPA at Cockoponsett Connecticut State Park for a bit, as well as I took them to Rocky Neck State Park and used them to clear the "Nature Trail"  for the camp sites Nature Center. The maintenance guys at Rocky Neck started with standard weedwackers but quickly went through a good bit of string and even with blades on them the hardy brush and briars would just wind up around the heads of anything that rotated. I came back with the 2 Hedge trimmers and we finished the last 3/4's of the trail in about 20 minutes. Took us longer to clean up the debris after than to clear it.
The Batteries on these things are much longer lasting than you'd expect. I have yet to run it long enough to kill a battery which is really good. But estimating time of use from the amount I have used one and how far down the meter on the battery is I'd say you'd get 2+ hours out of the smaller 2ah battery and 3-4 out of the 4ah battery, I'm sure over time the tool will wear and batteries will fade but honestly, they will just come to what I realistically expected at that point. There is plenty of power to cut right through anything 1/2 inch or smaller and on more than one occasion it bit right through 3/4 inch stuff with little effort.
They're not perfect, but really the only bad thing is they are a tad heavy and/or awkward. With the motor head and all down at the bottom of the pole they can be a bit heavy if swung around for a long period of time. Not terrible as the battery is balancing a bit by being up top and behind your hands but I wouldn't want to use them all day. Honestly, the amount of time the batteries will last is about the time it'll take for the average person to become a little fatigued from using them.  I do wish the upper handle loop was turned 90º for easier swinging or even better if it were pivotable would be awesome. But I'm kinda nit picking now and I have yet to find anything that will come close to the ease and speed for trimming back trails of the over growth, particularly the New England briars around here that these things buzz right through with ease.

I'm gunna try and find a way to mount my cam to the handle so I can record them in use so you can get a real feel of what they are truly capable of as well as I need to take before and after shots of trails they have helped clear.